"Everyone is talking about Chu♥lip Wiki. I'm so worried about its reputation that I can't sleep."

This article needs major writing and format revision to meet current standards under its new management. No one was kissed here.

Dr. Dandy, as his name implies, is the doctor of Long Life Town. He works at Yabu Hospital, which is just west of Poor Boy's house. He often sleeps in the mornings due to a type of insomnia he has called ainmosni. He is first seen in the game talking to Michelle.

If Poor Boy stays up past 1:30 AM, Dr. Dandy will be seen leaving the hospital with a large syringe. His appearance is heavily altered at night into a more vampiric form, and he will run up and down the streets looking for victims.

Dr. Dandy is a man with pale white skin, styled black hair, black mustache, black eyebrows, and a very pointy nose. He wears a very large head mirror, a white doctor's coat, blue pants and brown shoes. His eyes and eyebrows are curved, almost like crescent moons, giving the impression that he is always sleepy.

When transformed at night, his hair becomes a pinkish-red color and is styled up like demon horns and his mustache becomes longer and more exaggerated. His eyes are wide open, sporting layered green and red irises with visible bags underneath. He wears a black trench coat and red pants. If approached he will say, "Blood donation! Blood donation!" and will ask Poor Boy for his blood. If Poor Boy says yes, Dr. Dandy will attack and drain his blood for 20 Hearts of damage (a potentially lethal attack at lower levels). If Poor Boy says no, Dandy will ask for his blood type and will randomly attack or give up depending on his answer.

Dr. Dandy is overall very friendly and sees anyone in town free of charge. He greets Poor Boy kindly when spoken to and will rather arrogantly share the health information of any resident Poor Boy asks about with him while claiming that he is the only healthy person in town due to him being a doctor. While Dr. Dandy offers walk-in appointments and free check-ups, he unfortunately falls asleep in the middle of every visit.

In order to kiss Dr. Dandy, Poor Boy must make him a Heart Potion that can cure him of his illness. If Poor Boy visits the hospital late at night when Dandy is out prowling around, he can read the doctor's medical information on the desk for a clue to making the potion.

The sleepapple is an ingredient of the popsicles sold at Mrs. Plum's shop. Poor Boy can buy a popsicle from her during store hours (10:05 AM to 7:00 PM).

Once Poor Boy has the Wake Up Frog, sleepicada, and popsicle, he must wait outside the hospital until 1:30 AM when Dr. Dandy comes out. If Poor Boy sneaks past him and enters the hospital, he'll see that a very large machine can be accessed behind the hospital curtain. Using the three items he's gathered on the machine will give Poor Boy the desired Heart Potion. (If he gets a Heart Breaker pill, the items used were incorrect). With the Heart Potion in hand, Poor Boy can now confront Dr. Dandy. After letting the doctor take his blood, the potion can be used to heal Dandy and earn his kiss. 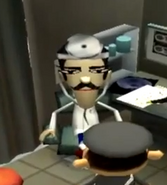 Dr Dandy at his desk.

Dr. Dandy at night, as depicted in the Japanese guidebook. 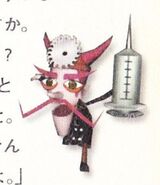 Dr. Dandy at night's model, as depicted by the Japenese guidebook.
Community content is available under CC-BY-SA unless otherwise noted.
Advertisement