1 Heart (Open Palm Slap)
Poor Boy's love interest, the Heroine (ヒロイン, hiroin) of Chulip. Also referred to as "Main Girl", as she has no default name and requires a name input by the player just like Poor Boy.

Upon moving in, Poor Boy dreams of kissing Main Girl and being happy with her for all eternity. When he actually meets her in real life, he immediately falls for her. Unfortunately he is, as she puts it, "not her type", and has to better his reputation and strengthen his heart.

The overall main objective is to finally earn her kiss and doing so marks the end of the game.

She is a young girl about the same age as Poor Boy. She has straight, shoulder-length black hair adorned with a big red ribbon on top. Similar to Poor Boy, she wears the usual female Japanese school outfit; a long-sleeved, all blue sailor outfit (セーラー服, sērā fuku), accented with a red tie, and white socks with black doll shoes.

Main Girl is the daughter of Julie and Goro, but she ran away from home after their constant fighting. Since then, she has been hiding out in an empty lot that belongs to Mr. Cheapot and sleeps in a giant drainage pipe.

She is an outspoken and confident girl who desires independence from her family. She is fond of astronomy and keeps a telescope in the empty lot which she uses to look for shooting stars at night. She also likes cats and is always seen with a white, black, and orange calico during the evening.

If Poor Boy shows her the cards of the other residents, she will have a lot to say about each of them. Her own card is white with a pink ribbon on it. She can also provide extra info on other items Poor Boy shows her.

After collecting every Item for the Loveletter Set, talk to Mr. Suzuki.

You will be able to make a Good Love Letter.

Go to the Undasura Park and interact with the center of the park, finish the tests you will be presented with and you will have a kiss.

(Note: For more detailed information about this process, you can visit the Walkthrough until the Guide is completed.) 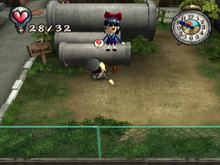 Sitting on top of the drain pipes 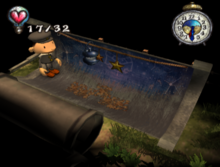 Her "sleeping" pipe from the inside 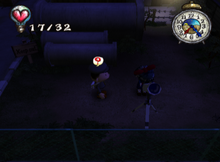 With her telescope at night 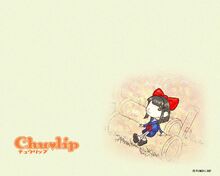 Wallpaper of the Love Interest.

The boy's first meeting with his love interest.
Community content is available under CC-BY-SA unless otherwise noted.
Advertisement