In Chulip, the Protagonist (主人公, Shujinkō) is a young boy who has just moved to Long Life Town with his father. He can be named by the player and has no default name, but fans commonly refer to him as "Poor Boy" in reference to his beginning heart level.

As he and his father become acquainted with their new home in Long Life Town, he encounters the girl of his dreams. Upon an initial attempt at a kiss, he is slapped and rejected. For her to accept his kiss, he must improve his reputation and strengthen his heart by helping and kissing the other residents of Long Life Town.

Poor Boy is a fair-skinned boy with buzz-cut black hair. He wears the typical attire of a Japanese school student, consisting of a black school uniform (学ラン, gakuran) with gold buttons, a black cap, and a pair of brown penny loafers. He stores and pulls items from a white satchel that is always around his shoulder.

Much like the rest of the residents in Long Life Town, Poor Boy has a personality and behavior unique to him. He's a growing boy who is typically respectful to his elders until his goals call for a certain level of mischief. As the story progresses, the things Poor Boy is tasked with and how he handles them get progressively more comical. Poor Boy is also not averse to doing useless or rude things; these actions usually result in some sort of benefit for everyone involved.

Although he is a (mostly) silent protagonist, he does have a few voice clips uttered here and there. Most notable is the nonchalant "Oissu!" he shouts when the player presses the X button. It's an impolite Japanese greeting that is commonly used by young boys such as himself and sets the mark for his overall personality. ("Ossu" and "uissu" are also similar.)

Leveling up Poor Boy's heart can only be accomplished by successful kissing. Going to bed will prompt Poor Boy's Dad to speak to Lover's Tree, who will then inform Dad of the number of kisses Poor Boy has earned and will grant Poor Boy extra hearts if he has reached a new level. Poor Boy also gains a new title with each level. 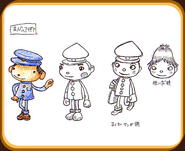 Poor Boy meditating under a waterfall.

A rough draft showing character with different heights. Note there are a number of unused characters. 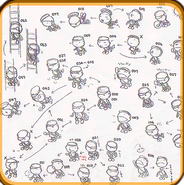 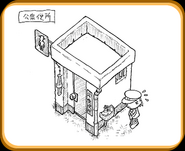 Bathroom concept sketch with a boy similar to Poor Boy waiting to use it.

Concept of Poor Boy with the ability to pick up items and toss them, along with using a radar. Here, he is referred to as "Punch-kun".

An image of Poor Boy meant to be an app tile for a phone. From the now defunct official Punchline website.

A simple walking gif of Poor Boy that was used on the now defunct official Punchline website.
Community content is available under CC-BY-SA unless otherwise noted.
Advertisement